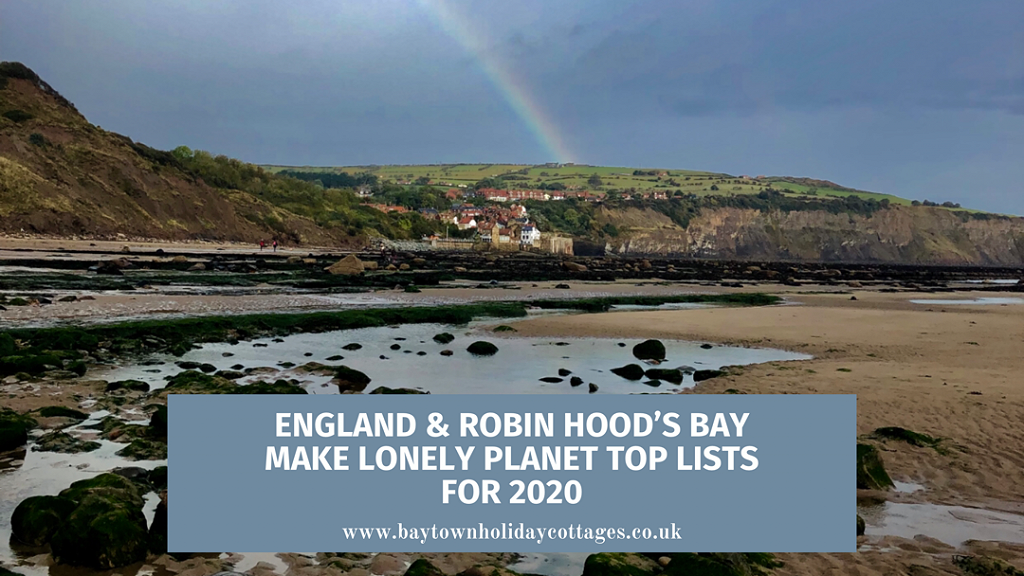 You won’t have to scroll far down the lists to find England and Robin Hood’s Bay. England made number 2 of "Best in Travel 2020 Top 10 Countries". Beating North Macedonia, Aruba, eSwatini (Swaziland), Costa Rica, The Netherlands, Liberia Morocco and Uruguay. England was only beaten to the top spot by Bhutan.

It's almost as if Lonely Planet were quite literally perched on the edge of our magnificent Yorkshire Coast when they described what makes England so special.

"Taking a bracing walk on a windswept pier, eating delicious fish and chips, searching for marine life in rockpools, finding fossils in ancient cliffs, building sandcastles and dolphin-spotting on picturesque beaches are just some of the activities offered by the English seaside." Lonely Planet 2019

It really does describe the coastal edge of our magnificent North York Moors National Park. These are the things that us dear locals love to do and it's what we love to share with our visitors too.

Splendid views will greet you from Whitby and Saltburn piers, each one different. You will taste no better fish & chips here and you won't be stuck for a good spot to get them. Yorkshire is a hive of fishing activity. Home to and landing some of the best and freshest quality seafood. A huge part of that industry being large Brown Crab and Lobster.

Rockpools. Marine life. We have it in abundance. The scaurs along our craggy, rocky, dramatic cliff lined coast make the perfect setting for rockpools.

Dinosaurs. You might not be lucky enough to unearth a dinosaur but there's nothing cooler than finding fossils. The imprint or shape etched in stone from the dinosaur era.

You can spot more than Dolphins here. You can even spot whales. You've just got to know where to look and who can take you. Something you can really get up close to though, but not too close mind. Colonies of Seals.

Right here in Robin Hood's Bay right at the far end of the Bay underneath the Ravenscar Headland. This is where you will find Seals. As for the beaches there's far too many to list. Robin Hood's Bay beach is a pretty good all-rounder. Dog friendly all year. Rockpools. Sandy stretches. Fossils. Refreshments close by. Sounds like bliss. Don't just take our word for it though. Come and try it out for yourself and book a Baytown Holiday Cottage. Stay a while.

Lonely Planet tells us why our little village is so special:

"A tangle of mazy lanes, age-old pubs and Victorian villas wind down to the beach at Yorkshire’s Robin Hood’s Bay, a historic fishing village set amid dramatic cliffs. Once a smuggling hotspot, the port is now famous as a jumping-off point for the 190-mile Coast to Coast trail. Taking around 14 days, and also known as Wainwright’s Coast to Coast (after the man who devised it), the route to St Bees in Cumbria has numerous variations. It’s not technically a national trail but is a spectacular trek through three national parks via a memorable mix of valleys, plains, mountains, dales and moors." Belinda Dixon, Lonely Planet Writer, September 2019

The Coast to Coast Walk might not be a National Trail but lucky for Robin Hood's Bay we have one of them too.

The Cleveland Way spans 109 miles through Moorland and along Coastland. Taking in Heritage sites, heather moorland, dramatic cliff tops and coastal views. Market Towns and quaint Villages along the way. Robin Hood's Bay sits about halfway along the coastal section. The perfect pit stop for a couple of days. Pack in a massage to prepare you for the rest of your journey. Refuel on delicious local food and drink. Take in the friendly atmosphere and relax and recoup.

So, if you visit just one piece of England’s coastline then make it Robin Hood's Bay. Make it a Baytown Holiday Cottage.