A to Z of Robin Hood's Bay 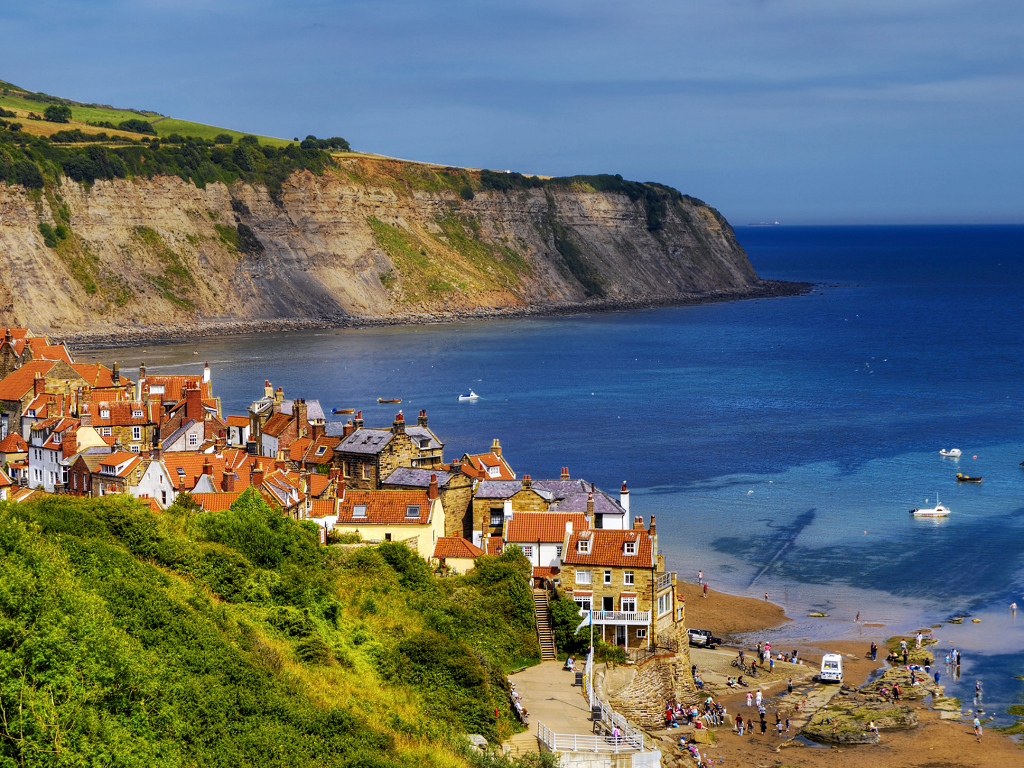 The A to Z of Robin Hood’s Bay

Robin Hood's Bay isn't called the Dinosaur coast for nothing. There are lots of varieties of fossils to be found here along the bay if you know where to look. Walk far enough and you may just find Ammonite upon Ammonite every other step if you're lucky.

Sitting at the bottom of the old village of Robin Hood's Bay sits the latter part of its name, the Bay. With rocky foreshores, an abundance of rock pools and sandy stretches Bay Beach is ever changing with the tides and no two days does the Bay look the same.

There are so many walks to be had in and around Robin Hood's Bay but two of the most famous and stunning have to be the Cinder Track and the Cleveland Way. The Cinder Track spans 21.5 miles, the full length of the old Railway line from Whitby to Scarborough. Robin Hood's Bay sits a little way over half way along the coastal stretch of the Cleveland Way, also part of the North Eastern Stretch of England’s Coast Trail.

Robin Hood's Bay is the ultimate in dog friendly. Dogs are allowed on our stunning beach 7 days a week, 365 days a year. There is not a single restriction. Not only that there's dog friendly cottages and you will be hard pushed to find an establishment that isn't friendly for your furry best friend or family member. There's even a shop dedicated to the pooches so you can treat them to your heart's content.

There is so much to explore here in Robin Hood's Bay. From walks, rock pools, wildlife, the heritage, night skies, local produce and so much more.

It's no secret here on the Yorkshire Coast we have the best Fish & Chips, you could probably say World Famous! Why not sit on the Quarter Deck and watch the world go by whilst you eat.

A hard-wearing woollen sweater hand-knitted and traditionally worn by fishermen. Each fishing community had their own pattern of Gansey so if Fishermen were lost or died at sea, they could be sent home to their families. The Robin Hood's Bay Gansey is patterned with ropes & it is still possible to buy a Robin Hood's Bay Gansey knitted to the traditional pattern. Heritage Robin Hood's Bay has a deep rich fishing & whaling heritage & with that naturally comes a past famed for the smuggling of contraband. Items such as Rum, Silk, Tea and Tobacco were known to leave the boats or ships on the shores of Bay Beach and never see daylight until they reached the upper Village. Passed through the tunnels of the Beck, up into one house and then into another. It is still possible to see some evidence of how and where smuggling took place to this day.

Robin Hood's Bay has a deep rich fishing & whaling heritage & with that naturally comes a past famed for the smuggling of contraband. Items such as Rum, Silk, Tea and Tobacco were known to leave the boats or ships on the shores of Bay Beach and never see daylight until they reached the upper Village. Passed through the tunnels of the Beck, up into one house and then into another. It is still possible to see some evidence of how and where smuggling took place to this day.

Robin Hood’s Bay quite possibly has the most photographed ice-cream van in the whole of Yorkshire if not possibly the UK. Whether your taste is for a 99 with a flake of course, 1 scoop, 2 scoop, cone or tub, sauce, nuts we’ve got it right here. As well as the run of the mill ice lollies and other branded treats we also have the creamiest, tastiest locally made ice-cream from Beacon Farm.

Jet is a semi-precious gem stone made from fossilised Monkey Puzzle Tree. The Jet found in the Whitby area is famed for its quality. Although it is much harder to find today it is not impossible so keep your eyes peeled when strolling on the beach as you might just be lucky enough to find your own piece of beach treasure.

Once upon a time King Street was the main road into Robin Hood’s Bay. Over the years this wonderful little village is thought to have been twice the size. Sadly, due to coastal erosion it is thought some 200 houses have fallen in to the sea.

Old timers and frequent visitors will know their way around this little village of Robin Hood’s Bay. First timers to Robin Hood’s Bay will most probably find themselves lost in the quaint cobbled alleyways. Impossible at first to work out which way to turn or which street goes where especially when its impossible to tell which part of a house belongs to which as they tumble upon one another. Don’t fear getting lost here, it’s all part of the magic and you won’t be lost for long you’ll be sure to bump into a friendly local who will kindly point you in the right direction.

The Old Coastguard Station sits at the foot of the Dock of Robin Hood’s Bay and to the side of the slipway onto the beach. Over the years the old Coastguard Station has been houses, holiday lets, a marine lab and now it is home to the National Trust as a visitor and educational centre.

Said to be the last film Daniel Day Lewis will ever star in the Phantom Thread set in the 1950’s was filmed partly across the North York Moor’s National Park. The Victoria Hotel had a makeover to fit with scenes and you can see some of your favourite members of staff there as extras. Keep those eyes peeled folks.

Robin Hood’s Bay is famed for a past rich in Smuggling. Customs and Village officials were known to have been in on the smuggling secret each accepting there cut. From contraband be it Money, Tea, Rum, Silk or Tobacco women’s dresses made good hiding places with secret pockets in the lining, the Beck, tunnels, chimneys, secret hatches, secret cupboards all made great hiding places too.

Where more beautiful to get married than Robin Hood’s Bay when you have a deep love for Yorkshire and the sea. You have the Victoria Hotel and its beautiful garden overlooking the sea & Secret Seaview Café Bar with its unusual and perfectly refurbished secret chapel in choice of wedding venues. The most stunning of Bay’s and quaint cobbled village as a back drop for your wedding photos. You also have a wide range of choice in Village Hall, Pubs, Hotels, Restaurants, Bistros and other venues to host your wedding breakfast and reception. You couldn’t ask for a more special village to host your special day and create the most wonderful and special memories.

Well you can’t have the most perfect weather everyday and some would say rain is good proper Yorkshire weather. If we’re honest Umbrella is in there because well, we struggled with a U. Really there’s no such good thing a bad weather in Yorkshire just bad clothing so if we’re very honest you would be better off layering up, carrying a good rucksack and taking some good waterproofs then you can strip off or add layers at will and need.

Victorian Houses make up a good chunk of the upper village of Robin Hood’s Bay. You will find beautiful Victorian terraced, semi-detached and detached Victorian houses.

There’s nothing better in the winter months especially than watching the waves on a stormy day or night, you will get the odd stormy day or night in the Spring or Summer but the best are most definitely in the Autumn and Winter months. Its always great to walk on the beach the day after a storm. There’s no better way to truly learn and respect the power of the sea than to watch it in action during the storm, always stay safe folks don’t be getting too close to waves or standing on slip ways or attempting to dodge waves. As beautiful and amazing as she is the Sea can be a very dangerous place. Safety before beauty.

There is nowhere more magical to spend Christmas than Robin Hood’s Bay. Smoking chimney pots, walks on the beach, drinks in the pub around a cosy fire, carols in the dock on Christmas Eve, Christmas Dinner in the cosiest of cottages with the people that are most important to you and curling up in front of the fire with a good Christmas film.

Robin Hood’s Bay sits about a third of the way down from the Tees Estuary on the Yorkshire Coast. With some of the most dramatic coastline the Yorkshire Coast is home to the Cleveland Way and the North East section of England’s Coast Path.

At the end of the day and the end of the A to Z of Robin Hood’s Bay what better than to reside in an Old Fisherman’s Cottage in Robin Hood’s Bay? Baytown Holiday Cottages offer a selection of self-catering accommodation. There’re sea views, dog-friendly cottages, free Wi-Fi, cottages with parking permits, cottages perfect for couples and cottages perfect for family and friends. We also have cottages that are suitable for storing bikes, washing kit for walking, cycling and other outdoor activities. We also have cottages with log burners, and we have cottages that evoke feelings of nostalgia.